This study investigated the effect of a winglet on the velocity field around a rigid flapping wing. Two-dimensional particle image velocimetry was used to capture the velocity field of asymmetric one-degree-of-freedom flapping motion. A comparison was conducted between wings with and without a winglet at two flapping frequencies, namely 1.5 and 2.0 Hz. The effect of the winglet on the velocity field was determined by systematically comparing the velocity fields for several wing phase angles during the downstroke and upstroke. The presence of a winglet considerably affected the flow field around the wingtip, residual flow, and added mass interaction. The added mass was lower and residual flow was weaker for the wings with a winglet than for the wings without a winglet. The added mass and velocity magnitudes of the flow field increased proportionally with the flapping frequency.

I. Kroo, Drag due to lift: Concepts for prediction and reduction, Annual Review of Fluid Mechanics, 2001.

H. D.Cerón-Muñoz and F. M. Catalano, “Experimental analysis of the aerodynamic characteristics adaptive of multi-winglets,” The Proceedings of the Institution of Mechanical Engineers, Part G: Journal of Aerospace Engineering, vol. 220, no. 3, pp. 209-215, March 2006.

G. Srikanth and B. Surendra, “Experimental investigation on the effect of multi-winglets,” International Journal of Mechanical and Industrial Engineering, vol. 1, no. 1 pp. 43-46, January 2011.

K. Mazaheri and A. Ebrahimi, “Experimental study on interaction of aerodynamics with flexible wings of flapping vehicles in hovering and cruise flight,” Archieve of Applied Mechanics, vol. 80, no. 11, pp. 1255-1269, November 2010. 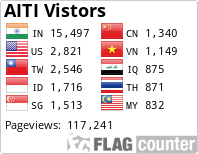 Guest Editors are cordially invited to submit proposals with thematic topics for publishing in AITI. The proposals of 1-2 pages, Free Format, A4, MS-WORD, with complete address, fax/phone number and e-mail address should be email to aiti.taeti@gmail.com.

Once the proposals are accepted, the Call for Papers will be posted into the journal’s website. And a Special Issue section in the online submission system will be set up.