Image scrambling is a process to convert a meaningful image into an unidentifiable or an unordered image by changing the pixel position such that an unauthorized user should not be able to access the original contents. The paper summarizes the various chaotic maps based scrambling methods with their performance measures. The discussion focuses on the scrambling techniques like Arnold map, Affine map, Baker map, Henon map, Logistic map, Fibonacci sequence, Fibonacci-Lucas sequence, and Fibonacci P-code transformation used to shuffle the image pixels in various image encryption algorithms. Each scrambling method is observed by using the adjacent pixels correlation coefficient, NPCR and UACI, scrambling/unscrambling speed, mean value analysis, entropy and peak signal-noise ratio. A comparative table is used to represent the reasonable computational outcome of each analysis parameter. The relative analysis of the performance and security measure highlights the weakness and strength of discussing scrambling techniques and can be used in the case-based image cryptosystem in future research.

G. A. Sathishkumar, K. B. Bagan, and N. Sriraam, “Image encryption based on diffusion and multiple chaotic maps,” International Journal of Network Security and its Applications, vol. 3 no. 2, pp. 181-194, March 2011. 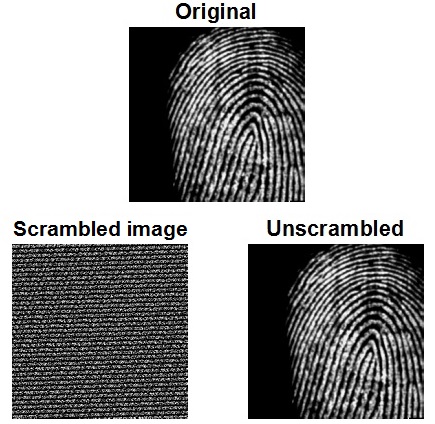