This paper presents an optimal Distribution Network Reconfiguration (DNR) framework and solution procedure that employ a novel modified Gray Wolf Optimization (mGWO) algorithm to maximize the power loss reduction in a Distribution System (DS). Distributed Generation (DG) is integrated optimally in the DS to maximize the power loss reduction. DNR is an optimization problem that involves a nonlinear and multimodal function optimized under practical constraints. The mGWO algorithm is employed for ascertaining the optimal switching position when reconfiguring the DS to facilitate the maximum power loss reduction. The position of the gray wolf is updated exponentially from a high value to zero in the search vicinity, providing the perfect balance between intensification and diversification to ascertain the fittest function and exhibiting rapid and steady convergence. The proposed method appears to be a promising optimization tool for electrical utility companies, thereby modifying their operating DS strategy under steady-state conditions. It provides a solution for integrating more DG optimally in the existing distribution network. In this study, IEEE 33-bus and 69-bus DSs are analyzed for maximizing the power loss reduction through reconfiguration, and the integration of DG is exercised in the 33-bus test system alone. The simulation results are examined and compared with those of several recent methods. The numerical results reveal that mGWO outperforms other contestant algorithms. 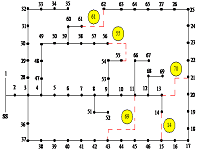